It’s Monday evening. I’m sorting out a quick supper because it’s rehearsal night. No need to think about pudding because there’s sure to be some of Sarita’s lemon drizzle cake!

Then I remember. The play is over. So what am I going to do with my Monday and Thursday evenings now? For a start I think I’ll sit down with a glass of vino and reflect on the production and my time with PADS and Blackham Players.

I’ve been with the drama group for over 20 years now. It all started when my other half told me that ‘since I could be a bit of a drama queen at home, I should put it to good use.’ The rest, as they say is history! 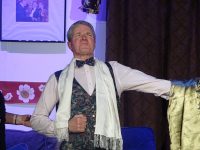 ‘Play Safe’ has been a great journey, if at times a bit of a roller coaster! Rich stepped up to the plate for his directing debut and with his great organisational skills and focus, we’d already had read-throughs by June, cast by July and rehearsing by August – almost unheard of!

He chose a new play – a comedy which I always enjoy and we were soon into ‘blocking’ (sorting out the movements) and rehearsals (with scripts in hand.) He introduced a bit of new technology in the form of an online App where you can download your script onto your phone complete with spoken words (which sounded more like a female version of Stephen Hawking!) Very embarrassing when you forget to put your phone on silent in the wings!

I always enjoy rehearsals. We’re a very social bunch. Some of the photos tell their own story! And there’s plenty of tea and hopefully said lemon drizzle cake to keep up our energy levels. I think the cast may have been a bit too much for Rich, because a few weeks in, he decided to escape to Italy! he said it was for work, but his facebook posts told a different story of cappuccino, red wine and Italian café life!

So a bit of juggling and ‘Barry the Brain’ (AKA Tony) stepped into the directors shoes. Rich 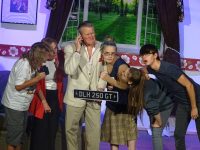 promised to return for the performances and we now have ‘good cop/bad cop’ directing! We also had a couple of casting changes to deal with – one which we sorted with an ingenious change from a male to a female part where Ben became Bennie.

At rehearsals, the pace picks up. Lines are getting learned (sort of!) Furniture and props are sourced including wheelchairs, Zimmer frames and a Whopper Chopper! And as we get close to production, the real strength of our group shines through with a host of jobs to be done to make it all go smoothly on the night – Publicity, Box office, catering and bar arrangements, set design and build, raffle, sound and lighting and setting up and clearing down the hall.

Finally, we’re in performance week. Rich has come back from Italy as promised and we get through Tech and Dress rehearsals OK and find ourselves nervously in the wings on the first night asking each other “remind me, exactly WHY do we do this”?!

But, as always all is well. We manage most of the lines in roughly the right order (but 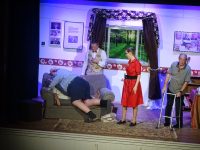 sometimes causing our lovely debutante prompt Lynda to have kittens!) The audiences are as always very appreciative. They even laugh in all the right places (and some places where we didn’t expect!) and give us some great feed-back. We even had one of the writers (Jane Hilliard) come and see us and she gave us some lovely comments. The last night is great and we celebrate afterwards with a few glasses and a delicious home-made chilli.

So, another very enjoyable production from start to finish. What a great bunch of friends to do it with. I’m still dreaming of whopper choppers and 25 million dollar Ferraris. I’m sure dear Will Shakespeare is turning in his grave at my miss-quoting of some of his great lines and my attempt at Shakespearian Hip Hop. And there’s always the next production to look forward to next year. Why don’t you come and join us? There’s something for everyone. 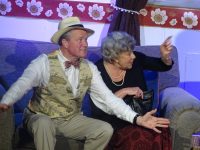