We hope you are not too disappointed but the safety of our audience and of course our wonderful cast and backstage crew is paramount.  However please mark your diaries for our revised performance date

It’s going to be a superb night of entertainment!

The Ghost Train is a comedy thriller written in 1923 by Arnold Ridley, who is less well-known as a playwright than as Private Godfrey, the most senior member of the Walmington-on-Sea Home Guard in Dads Army. The Ghost Train achieved notable success, running for 665 West End performances and has been adapted for the cinema no less than three times.

So book your tickets now by calling the Director Sue on 01892 770104 0r on line at Bookitbee,com by clicking here 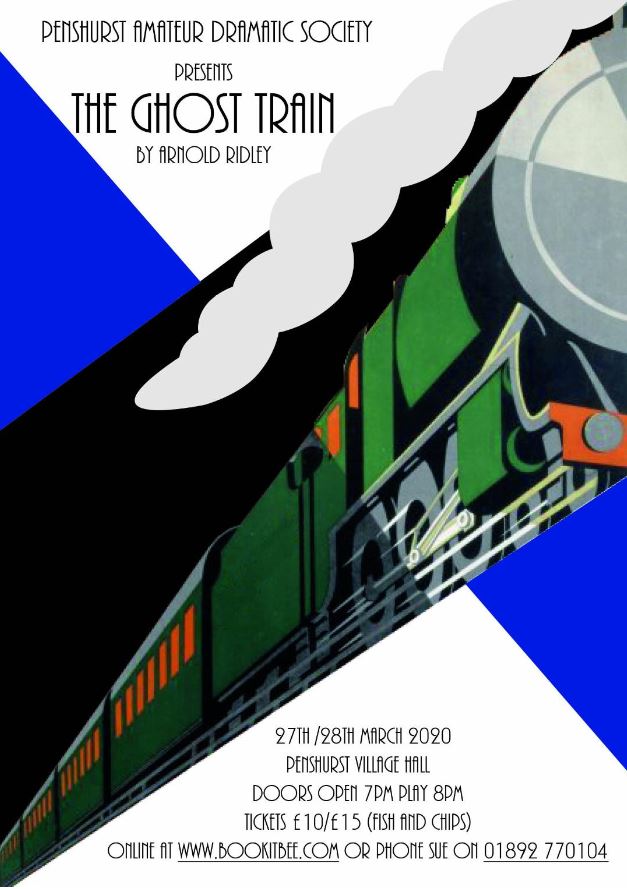 PADS is a very friendly local amateur dramatic group which operates out of the Village Hall in the lovely village of Penshurst. We produce two comedy productions a year and a pantomime every two years in February to cheer up the post-holiday doldrums. We also have been known to perform short 15 minute plays at local Fetes and other occasional comedy productions. We welcome new members who’d like to venture on stage or as part of the production crews.

We collaborate with other local groups and currently team up with Blackham Country Players (BCP), so most plays are performed in two very different locations and to two rather different audiences, making  the sometimes hard work of rehearsals well worth while and very rewarding.

There is only one rule we have and that is to have fun!

and thank you to all the cast crew and backstage helpers that helped make this production such a success.  We only hope you enjoyed it half as much as we did putting it together for you.

Pictures taken during Friday nights production can be found

and if you have any more you have taken that we can put on the website please send them over to the webmaster richielake@googlemail.com who will get them posted.

Should you be interested in taking part either on stage or behind the scenes, you will be made very welcome.  Please contact us and let us know.