Well here we are on Bondi Beach in the hot Australian sun. I have just sent Claws off to play beach cricket with a local boy called Don who we met at the local surf-shack this morning. As the evenings are short of things to do I was thinking of dictating this memoir to Claws to type up this evening, but I thought it would just end up as “you have to be bad, really bad, ,really really bad, oh just so bad etc” so I have decided to write it myself.

Anyway the first thing about being the baddie in Pantomime is to possess the evil gene. The evil gene is inherited and gives you access to the society of evil baddies website evilbaddies@demonicpersonailties.hell.com, here you can download, evil cackles, dark looks and many more sinister resources. These are important if you wish to be successful at becoming across as being evil.
Being a baddie, one of my favourite tricks is to make a young child cry during one of the heroines main songs, this makes the heroine unsettled and hopefully then fluff her lines. This makes you look professional and the poor young girl a hopeless amateur. However, this can occasionally backfire as I discovered in my first Penshurst Panto, when during a particularly evil cackle in the first scene most of the brats in the front two rows burst out in tears and left the hall. I said to Mrs Morrison we should have resold their tickets but she told me not to be so mean. As no one no matter how evil would want to cross Mrs M.  Matinee performances are only grade2 in menicinglyness, I can therefore only assume the child in “Dick Whittington” either had; a bout of colic, didn’t like Rob’s music or has the evil gene and will go on to stardom in future Penshust Pantos 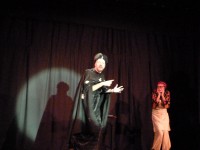 Some junior members of the chorus think they could be capable of playing the baddie, but frankly their mincing dancing and camp performances would only heap further embarrassment and misery on his daughter Jesse.
Another useful trick is not to learn your lines. You will be given a henchman, who does need to learn their script, but otherwise it should just be ” I say something, you say something”. This upsets the goodies no end who have stayed up late into the night to be word perfect only to be presented with a mish mash of their cue. Because their are always several goodies and only one baddie you are essentially indispensable and can completely ignore any stage directions given to you by the director.
The only stage direction that does have to be observed is that the baddies always enter stage left in Penshurst Pantos. A lot of people think this is because the Latin for left Is sinister, but actually it is because this way I get my own dressing room, the rat cave, and don’t have to mix with the hoi poloi.
Your only function as a baddie is to be booed, so no acting ability is required. If your 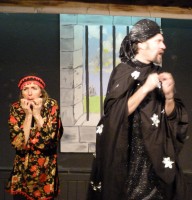 performance is appalling you will be booed and if it is brilliant you will be booed as if you had been appalling, a true win, win situation.
Anyhow I have just seen Don smash the ball into Claws face and I had better make sure she hasn’t damaged his ball. While I’m down there I might have word with the young lad who was bowling.  Young English boy called Jardine, I feel a plan forming……