Phew, What a year!

So the year is coming to an end, tis the season to be jolly, wish festive cheer to all, and any turkeys still around can breathe a sigh of relief.  It’s the time of year when we look back and reflect on what we did, where the year went and what happened to all those good intentions we said we were going to do back in January.  So, with that in mind, I thought I would take a moment to reflect on PADS 2016.

Flippin ek! What a year it has been!  We’ve walked into the age of social media, undertaken a major review of our stage lighting and oh, yes, put on some stonking good plays as well!  We also ended the year with more committee members, better organisation, and a brand new Chairman.

Firstly the major change since this time last year is that we now have a very active website!

In the last quarter of 2015 some brilliant chap on the Committee who had experience in creating and maintaining websites came up with the idea that we needed to develop our own to promote ourselves and enter the 21st century.  Now I can’t remember who this brilliant chap was,  (however, I hear he also writes excellent blogs), but he put together the framework of what the website would contain, researched the best web designer that could fulfil our needs, and put a proposal to the committee the back end of 2015.  With an excellent sales pitch that would make the finalists of The Apprentice throw in the towel, the proposal was approved and this brilliant Committee member (still can’t remember his name) worked closely with the web designers Cottagewebs (www.cottagewebs.co.uk) and launched our site on January 20th 2016 to co-inside with our first committee of the year.  Since the launch, the website continues to expand and is now filled with photos from our productions and is also used as a central hub for cast and crew for our forthcoming Panto.  I wish I could shake that guys hand!

The next key event in our 2016 calendar was our first play of the year.   At the January meeting after various discussions in December we had decided on our next play “A Fete Worse Than Death” by Richard James to be directed by Robert Rees in the Spring.

Deciding on the next play can be a point for much discussion at Committee as meetings as we all want to put on a play that will not only be a great performance that entertains our audience but is also right for the village of Penshurst and Blackham without too many technical difficulties and suitably rewarding for the cast.  Fete Worse Than Death ticked all the boxes!

Casting was held the evenings of the 12th and 14th of January and we had the cast commenced rehearsals on January 26th for two evenings a week.  This was really a fun play to perform with a great cast.  I think the most challenging part of the play was not learning the words (which is always a challenge!), but manufacturing a marrow.  Those of you that came to see the play will remember that the play

centres on the rivalry for growing the biggest marrow in the local fete and we needed to produce two marrows.  One large marrow and one SUPER large marrow.  What made it worse that the SUPER large marrow or Leviathan as it was called, had to be robust enough to be repeatedly attacked in a mad frenzy during rehearsals and every night during performances.  This caused a great deal of stress and effort by a few team members but eventually we avoided a ‘Marrow’ escape and had a SUPER large phallic marrow ready for the performances.

After the successful performance in April of the play, our minds then turned to other matters including the upgrading of the lights in the Village Hall and initial discussions around the next Panto.  Those of you who have been behind stage will notice that the lighting setup looks something like a dismantled Rubic cube with wires and plugs leading everywhere with no sense of direction as to what operated what and looking like a crochet hat that my grandma used to make!  The lights above the stage were rumoured to have come from Thomas Edison’s testing lab and the knowledge to operate the whole lighting system required years of study at a Shaolin monastery and the inner secrets were handed down from generation to generation over the past 120 years.  So it was time for a change!

We wanted to bring ourselves up to modern day specifications and have lights that could be set to different colours or moods or so bright that the actors would have their eyebrows singed and get an instant sun tan!  We also wanted them simple to operate from any PC so that an intellectually trained monkey (an adequate description of our lighting crew) could operate.  Well after much discussion and competitive tendering, we ended up with a planned revamp that will enable us to compete with the London Palladium!   As the cost of this refit would have been enough to launch the next NASA space shuttle (or pay for a night out with our new Chairman), we managed to share the cost with the Village Hall Committee and a local grant.  The refit takes place in early January 2017 and we are really looking forward to it.  The Panto will be our first test of the new lights so everything will be fine (oh no it won’t) oh yes it will!

June also saw the discussions around the next play to be run by the Blackham crew (we take turns and share actors and stages) and by the choice of one of the Blackham Committee members (mentioning no names but it was Jenny) it was decided to put on a serious play with no comedy.  Quite a big leap for us as we would actually have to really act which is something we at Penshurst obviously shy away from whenever we can. 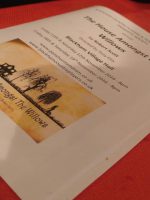 Many plays were considered but it was finally decided to go with “The House Amongst The Willows”.  Auditions were held at the end of June and the play was cast early July.  After a script read through which frightened the pants off us, realising the hill to climb learning the lines and the tension that builds during the plays performance.  Rehearsals then commenced and all went well.  It can be said that learning this play was like climbing Everest with flip flops.  So much to learn, a lot of stage movements and angry moments followed by quite moments (light & dark) as well as learning to throw fellow actors across the room whilst screaming at them, one cast member having to drop dead like a stone after being shot and two scenes going on at once in different rooms with non-directive cue lines. 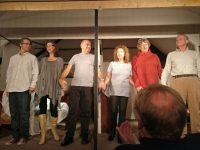 performances.  One thing the audience will never know however is that there was one scene that was never performed the same way twice during the four-night run and only went completely to script on the last night!  Great play and we had some great feedback.

The last two months have seen the starting up of the Panto engine that runs every two years.  Once again Robert Rees has written another brilliantly funny Panto based upon the story of Dick Whittington. Lots of corny jokes, lots of funny songs and great characters!  We have even managed to attract some new acting talent as well as all the familiar faces!  Being directed by the panto experts Sue Hayward and John Morrison this promises to be a great show once again and tickets will sell out faster than a Robbie Williams concert at the O2 so book early.  Rehearsals started in December and will go up a gear in January with the cast furiously learning lines and songs over the Christmas period (at least that’s what we tell the Directors!).

The year ended with our Christmas party held at the Leicester Arms and we were entertained this year with 10 rounds of Call My Bluff performed by O’Shea, Williams and Rees who’s ability to tell convincing lies was so good I will never trust anything any one of them tells me again.

So that’s it!  Another year over! Another busy year ahead!

Next year plans to be equally as busy with loadsa fun on the way.  I know myself and the rest of the PADS crew are looking forward to making 2017 as equally successful as this year and entertaining the local villages on the way as well as raising money for charity.

If you fancy joining us then let us know or you can even use the contact form on the website.

I hope you enjoyed the read.